Dr.Ram hails from middle class family background, influenced by the charity work of a catholic priest in his childhood. He has been trained in sociology discipline and Obtained BEd in special Education. And did his Research on Problems of Families with Cerebral palsy.

His wife Mrs. Bindu Hails from a traditional family, She is a graduate did her Diploma in Physiotherapy and also Diploma in Special Education (AUTISM).She is a great supporter to Dr Ram to take this mission Ahead.

She Has been called as Mother by Staff and Children. She takes care of welfare of all Children and Staff.

Dr. Pittu Ramanjaneyulu (Dr. Ram) founded ANURAAG, a non-profit in 1991 with a mission to support special education and therapeutic needs of children affected with severe mental health and neurological disorders like Cerebral Palsy, Autism etc. These services are provided to children from poor communities, absolutely free. The daily services at ANURAAG include one afternoon meal to all children. In addition to providing special education, the school offers speech, occupation and physical therapies. The professional and supporting staff at ANURAAG is deeply committed and caring to these children. At ANURAAG the primary focus is on developing child’s self-help skills and self-esteem that are essential for mainstream integration.

The current student enrollment stands at 80, since the founding of ANURAAG, about 500 kids have received these special services and transitioned to mainstream opportunities. These children not only became self-sufficient with required skills and many became part of the workforce contributing to the economic hardship of their respective families. Dr. Ram has been giving a strong hope to all Parents who thought their children would never be admitted to any school due to the severity of cerebral palsy condition. It is inviting thought for anyone to pursue social work when he or she gets to meet. The non-profit is managed by Mr. and Mrs. Ramanjaneyulu with financial support from donors and others.

He says ever since childhood he has been searching for a special cause where he could make a difference to the heavily underserved or systemically and socially ignored. He believes his motivation to become a lifetime social worker was, watching Mother Theresa’s selfless acts while growing up and the suffering he saw in the neighborhoods around. Typically in India at the time when he was growing up, the special needs children were not supported by families or the government and hence the human dignity was compromised. So he saw a real opportunity to do something very different.

Instead of pursuing the path of professional career, Dr. Ram and his wife, Bindu chose this path of selfless act. Between Dr. Ram and his wife they have contributed about 180,000 service hours in establishing and supporting their institution. A few years ago when he was in desperate need of funds to support ANURAAG, he did not hesitate to sell his home to generate cash flows. Coming from a humble and a middle class background, he has always been up against the financial challenges at various points through the course of running this non-profit.

Dr. Ram continues his mission to serve these communities and envisions ANURAAG as an inspirational role model to all aspiring social workers. He offers to serve as a mentor and guide for everyone who want to step up and take-on this cause in any part of the world. He sincerely hopes that within a decade or two there would be real viral effect of ANURAAG in that many ANURAAGs would be institutionalized in different parts of India and possibly in the entire World. 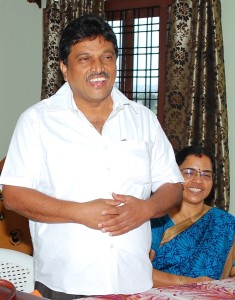 "From outside India "
Donate Here

steps to donate through paypal